Indigenous refers to a person who is native to an area. It is the term currently used by the United Nations, as well as the federal and provincial governments. There is no common definition, rather the basis is on self-identification with pre-colonial societies, traditional territory, and cultural systems. Important note: Most Indigenous peoples and Nations prefer to self-identify. If you aren’t sure, it’s respectful to ask.

The term Indigenous was chosen by Indigenous leaders in the 1970s to identify and unite diverse communities and represent them in global political arenas. This term is a relational word that high- lights peoples’ connections to territories, as well as their experiences of colonization. Indigenous is inclusive of First Nations, Métis and Inuit peoples.

Colonialism is the extension of a nation’s sovereignty over territory beyond its borders. This happens by establishing either ‘settler colonies’ or ‘administrative dependencies’ where Indigenous peoples are directly ruled or displaced. Colonizing nations generally dominate resources, labour, and markets of the colonial territory, and may also impose social, cultural, religious and linguistic structures on Indigenous peoples.

Cultural Safety is the outcome of interactions where individuals experience their cultural identity and way of being as having been respected or, at least, not challenged or harmed. Cultural safety requires respectful relationships and equitable partnerships.

The Five Principles of Cultural Safety include: 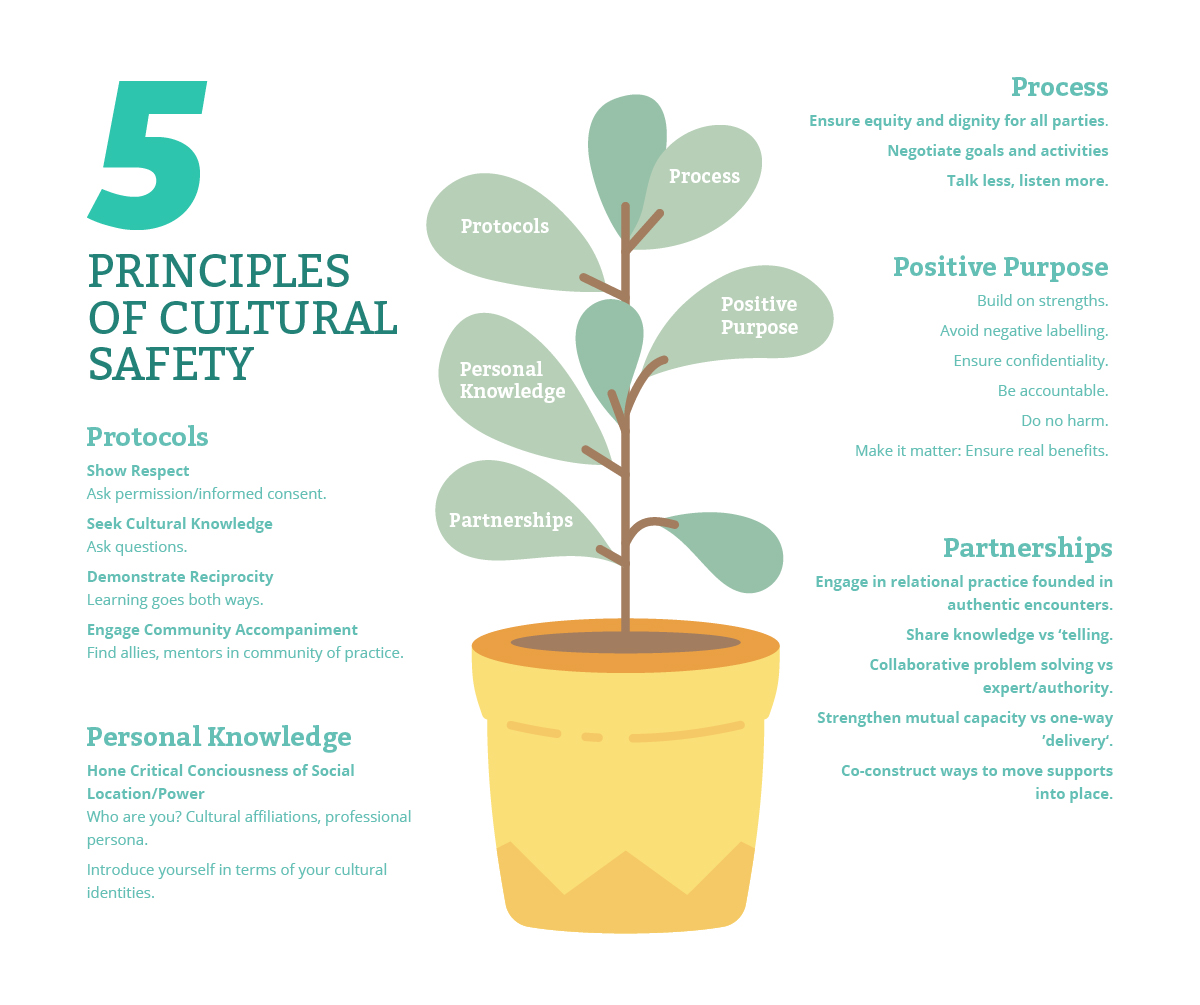 Cultural awareness is about recognizing that differences and similarities exist between cultures. Learning about the histories that impact Indigenous peoples in Canada is an important part of developing cultural awareness.

Cultural sensitivity grows when we start to see the influences of our own culture and acknowledge that we have biases. It is about appreciating that there are differences among cultures.

Cultural competence asks us to avoid making assumptions about people based on our biases. It requires developing knowledge, skills and attitudes for working effectively and respectfully with diverse and different peoples. While cultural competence does not require us to become experts in cultures different from our own, it expects us to be skilled in understanding interactions among members of a culture on their own terms.

Systemic barriers are policies, procedures, or practices that unfairly discriminate and can prevent individuals from participating fully in a situation or accessing programs, services and resources.